How Can Poker Be A Sport?

How Can Poker Be A Sport?

GAISF’s definition makes a clear and pragmatic description of what is needed for an activity to be recognized as a sport. A “sport” must;

GAISF uses five categories for sports in its member federations;

It then says that applications from mind games will only be considered after consultation with the International Mind Sports Association.

In poker, players with greater skill – generally those better able to read and deceive other players and who play with greater consideration of the mathematical odds – do better in the long run.

Indeed, poker as we know it is not regarded as a “sport” because the turn of the cards can strongly influence who wins and who loses any given hand. The influence of chance is so significant that poker is an activity where the element of luck is specifically integrated into the sport.

Then along came Match Poker to turn all of this on its head.

Match Poker is a way of playing poker specifically designed to offer poker as an official world sport.

To meet the definition of “sport”, Match Poker was designed so that a large part of the luck inherent in poker was removed. This was achieved by ensuring that:

To illustrate how this works, when playing Match Poker, receiving a bad beat from the unfortunate turn of a card is unlikely to affect your score negatively. This is because everyone in the same position on other tables was dealt the same “bad beat” cards – so even if you lost all your chips, you probably did not perform badly relative to them. 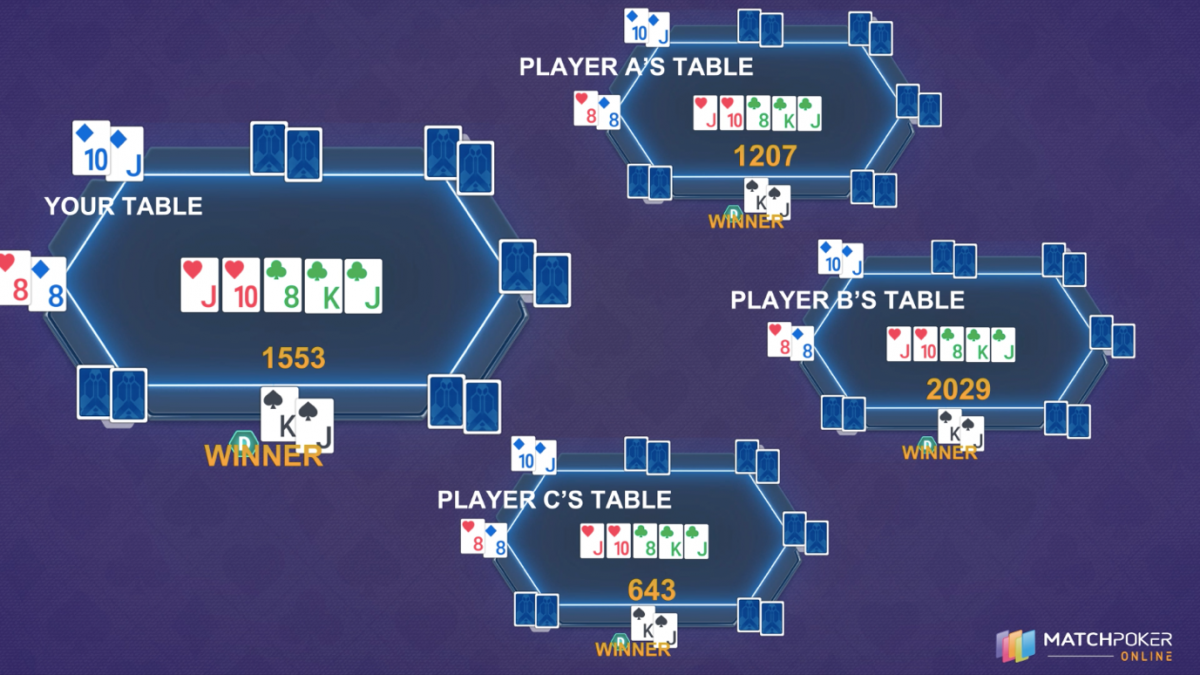 A look at how identical tables can have different results, because of players’ different skill levels. Notice the number in gold, which is the amount of chips a player has won.

Match Poker competitions have been played internationally several times over the past decade, between countries all over the world. These have been run by the International Federation of Match Poker (IFMP), and are discussed in depth in this article.

The result is that Match Poker has now been provisionally accepted by the GAISF as a world mind sport – alongside games like Chess and Bridge – sports which, combined, represent more than a billion players. Match Poker is a sport.1

When people think of sport, they think of games like football or tennis. It goes without saying that people have to be in the same place as each other in order to play a sport. This is not true for Match Poker.

In a mind sport, the competitive aspect is not between players’ physicality, dexterity or finesse. Mind sports focus on intelligence, quick-thinking, insight and strategy. When a competition features the human mind, the sport does not need to be played in a single location.

Cards can be virtual, and players can battle it out at simulated poker tables from internet-connected devices. Additionally, since the game is played digitally, copious amounts of data can be recorded, analysed and interpreted.

HOW IS MATCH POKER PLAYED?

Unlike traditional online or live poker, hands aren’t dealt to players randomly. A hand, when it is dealt to a player, is either being dealt simultaneously at other tables, all being played at the same time, OR it has already been played by thousands of players previously.

Your opponents in a match get the same cards as you, so it’s easy to see who played the cards better. But we can’t simply deal everyone at your table the same cards, that doesn’t work, so we place your opponents at other tables, in the same seat as you. Imagine a room with 20 tables. In Match Poker, every card dealt to the players around your table is also dealt to the players, in that same seat, around the other 20 tables – i.e., all tables are playing exactly the same hand.

WE CAN ASSESS HOW GOOD YOU ARE

Watching you play identical cards as players in your seat at 20 other tables gives us an extraordinarily good idea of how good of a player you are. If we had 20 tables of 8, we would be able to identify the best players in each of the 8 seats.

But we can do even better! In an online environment, you are not limited to just comparing your play to that of other players in the same position as you at a handful of other tables – you can also compare your play to every single person in the database who has played that hand configuration before!

This means a player can find out that they played a particular hand better than 92% of players on Earth, or perhaps that they received the 253rd-best result out of 42,593 people who played that hand before!

All of these elements are exactly what this brand-new, revolutionary app, called Match Poker Online™ brings to the world.

Match Poker Online then applies a statistical algorithm to the results of play of each hand to more accurately rank players. This algorithm takes into account the changing meta-game present in professional poker, providing the best possible official source of player rankings.

Additionally, the app will allow you to re-watch any hand you have played, compiling all the data available on that hand and the people who have played it in the past. It will then tell you if and when your actions aligned with those of the best players in the world. [Read more about the app’s hand-analyser tool here]. Every call, raise or fold you make will be compared against the actions made by the best 25%, 10% or 1% of players in the world and the app will tell you where you diverged from them.

No poker learning tool like this currently exists – where a player can get instant feedback on every decision they make. And, if you improve your play in Match Poker Online, you can expect your IFMP Rating to increase too. If you can increase your Rating high enough, then you might earn the opportunity to represent your country in international Match Poker contests!

Maybe you’re not “worldwide” material. But perhaps you could rank highly just in your hometown or in your suburb; in your job, or amongst your mates. After all, Match Poker is a sport – why shouldn’t it be run the same as netball, or football, or any other popular sport around the world? One day, local Match Poker Leagues will cater to all skill levels and be offered in as many places as possible.

When you combine this with sit ‘n’ go tournaments, puzzles for learning, and a whole array of additional features to be introduced after launch, Match Poker Online is shaping up to be one hell of an app!

If you want to be the first to play this revolutionary new form of poker in just the palm of your hand, make sure to fill in this online form so we can email you when the beta launches!

[1] To date, the IOC has not accepted mind sports for entry into Olympic competition, but parties, including the International Mind Sports Association, are working hard to change this. [Read our article on how Match Poker may one day become an Olympic sport!]