The Importance of Position in Poker

The button moves every hand. This ensures that everyone at the table gets an equal opportunity to play in different positions. And, as in property, position in poker is vital.

The player ‘in position’ is the one who acts last on all streets. The other(s) will be ‘out of position’, i.e. have to act first.

Acting last is such an advantage that every hand chart you read will recommend that you need much stronger hands to open with in early positions.

Positions at the Poker Table 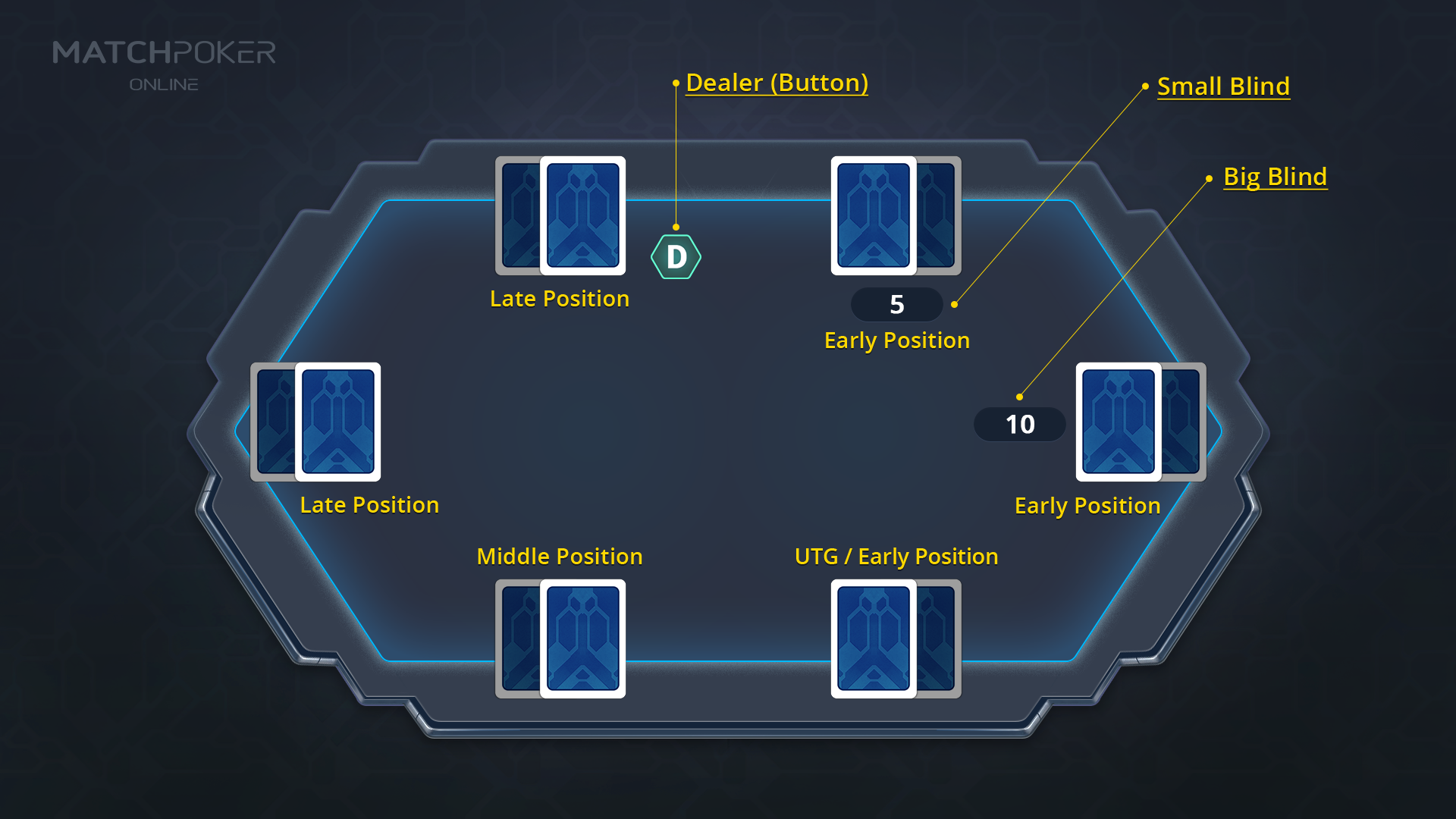 The seats around a No-Limit Texas Hold ‘Em table are usually described as:

The location of the button determines these.

‘Early position’ (EP) refers to the players in the small blind (SB) and big blind (BB), as well as the player sitting to the big blind’s left (i.e. ‘under the gun’ or ‘UTG.’). Note: While the SB and BB act last before the flop they’re called early position seats because they’ll be acting first in every betting round after the flop.

(At a nine-handed table, the next seat (UTG+1) might also be considered early position, as most of the table will be in later positions.)

‘Middle position’ (MP) usually refers to the next two or three seats at the table.

Four reasons why position is so important in no-limit Texas hold ’em poker:

When you have position on your opponent, you get the chance to take a ‘free card’ if your opponent checks to you – i.e. by checking behind you get to see the next community card for free.

For example, you have

flop. Your opponent, who had to bet first, checks. You can bet – but you could also check behind and take a ‘free card’ to see if you can make your flush.

When your opponent, who is out of position, shows weakness by checking to you, being last to act allows you to put a lot of pressure on, pretending you have a stronger hand.

For example, you raise on the button and get called by one of the blinds. The flop is

– it doesn’t matter. You used position to win the hand, not your cards.

The main advantage of position is that you know exactly what your opponent has chosen to do before you decide how you should play. Whether they check, (often signalling weakness), bet small, or bet big, you are being given valuable information.

Poker is all about making the best decision on imperfect information. Having more information is valuable.

Acting last on every post-flop street helps you control the size of the pot that you end up playing. This is valuable. If you decide you’d like to play a small pot and an opponent checks, you can check behind them. If they bet, you can fold or call – still keeping the pot small. If you want to play a big pot then, whether Villain checks or bets, you can bet or raise and increase the size of the pot.

Playing with position on your opponents both reduces your risk and increases your chance at rewards. So: