Whenever you play Match Poker Online™, the app will track two important aspects of your play style: your VPIP and your PFR.

VPIP – Voluntarily Put money (chips) Into Pot – is the percentage of hands you choose to play without being forced to (i.e., by being in the blinds). Every hand in which you voluntarily put money into the pot (whether raising, calling a raise or just limping in) your VPIP goes up by one. So, if you play 100 hands and voluntarily get involved in 40 of them, your VPIP would be 40 (meaning 40%).

PFR – Preflop Raise – shows how often you come into the pot, pre-flop, with a raise. If you came in with a raise in 18% of the hands you entered, your PFR would be 18.

WHAT YOUR VPIP AND PFR NUMBERS SAY

A VPIP of 21 or less1 tells us that you are pretty tight; 28 or more and you are loose.

Your VPIP/PFR expression is essentially saying, “Of all the hands you chose to play, how many of those did you enter with a raise?” This is a pretty good indicator of your level of skill. Playing too many hands (i.e., a high VPIP) and playing them passively (i.e., low PFR) are the signs of a “fish”.

You play too many hands. The higher your VPIP, the “looser” you are. A VPIP of 45 or more suggests you are very loose.

[Our 8-max opening hand chart suggests that you should be opening less than 25% of hands (taking into account both early position and late position).
Alternatively, click here for our 6-max chart.]

You are a tight player – not entering many pots. The lower this number, the “tighter” you are.

The higher this number as a percentage of your VPIP, the greater is the percentage of pots that you enter with a raise – so 24/21 is 87.5%; i.e. of the pots you enter, you enter 87% with a raise. This is very aggressive. It’s widely felt that more aggressive play gives you more opportunities to win on later streets.

*To work out what your PFR is as a percentage of your VPIP, do this calculation: PFR ÷ VPIP x 100

Firstly, learn the opening hand charts (see here for 8-max play and here for 6-max play) and enter the pot only with the hands suggested in these charts.

It’s generally thought that more than 70% of the time that you enter the pot, you should enter with a raise or re-raise (VPIP/PFR of 25/20, 20/15 or so). This is because one of the keys to winning, particularly in low or mid-level games, is aggression. By entering the pot with the betting lead most of the time, you are giving yourself more ways to win after the flop – and you are also representing strength to your opponent, which may discourage them from engaging with you. (Some 1/3rd of all pots are won by players that were actually behind!).

Poker uses VPIP and PFR to put players into the four main poker player types according to the following:

A passive player doesn’t often raise pre-flop (their PFR is a lot lower than their VPIP), while an aggressive player typically shows a PFR much closer to their VPIP.

The higher your VPIP, the looser (wider) is the range of hands you play.

The lower your PFR, the more passively you play your hand, i.e., the less times you open with a raise.

COMMON POKER-PLAYER TYPES AND HOW TO BEAT THEM:

Players’ VPIP/PFR can tell you a lot about them, their play-style, and how to exploit them.

Playing against them can be very profitable – they do a lot of betting and raising and so often over-play their hands – so use their aggression and let them build big pots for you, but the ride will be wild. You’ll be engaged in big pots and their range can be very wide – hence profitable, but dangerous.

They tend to bluff a lot – because often their hand is not great. Let them dictate the action and watch them hang themselves. Tend not to bluff them – they are more likely to call.

e.g., 40/10, 32/6 – a “calling station” or a “whale” or “fish” – VPIP typically above 33, PFR very low. Calls too frequently (likes to see flops with a wide variety of hands), but usually lets others drive the action. They’re conservative when it comes to raising and only do it with really good hands.

This is the sort of player you want at your table. They’re generally losing players, who call too frequently and raise too infrequently. They are too loose and too passive, so they rarely cause you trouble. Someone with this VPIP/PFR ratio is usually a good target to isolate because they’ll often play a “fit or fold” style, i.e., they’ll fold the hand if they do not hit on the flop. Tend not to bluff them – they are more likely to call.

e.g. 14/11, 11/8, 7/5 – a “rock”– a very tight and aggressive player. They are often winning players. They don’t get involved often. When they do, they do it with very strong hands and usually come in with a raise (because they know they have a range advantage).

Don’t give them too much action pre-flop but see flops against them with hands that have good potential to hit big. And don’t shy away from running a post-flop bluff against these players, because they often fold when they miss.

The following is a graph of what this all looks like, with our recommended ‘Goldilocks’ zone (in green) for VPIP and PFR: 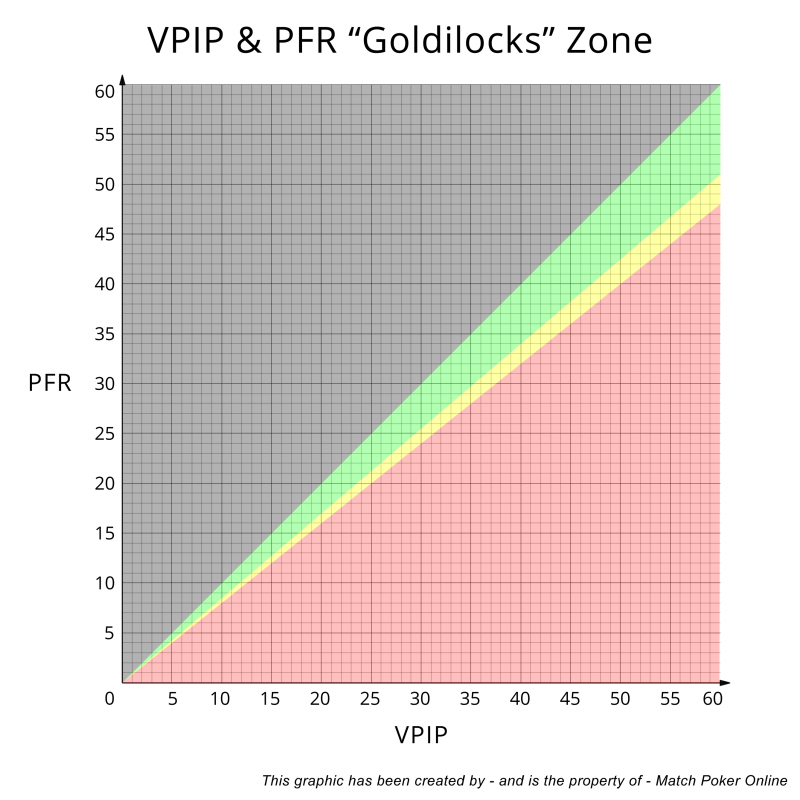 YOU ARE HERE TO IMPROVE YOUR RESULTS AND GRP – SO WHAT SHOULD YOUR VPIP/PFR BE?

While there is no single VPIP and PFR ratio that you need to have to be a winning player (and a lot will depend on how tough the game you are playing in is), it’s widely accepted that a tight-aggressive (TAG) approach is still the best one to have – i.e., around 21/18.

1. While these VPIP and PFR poker stats are very useful, you need to see them over a decent sample size, e.g., someone raising 10 out of 15 hands doesn’t necessarily mean they are a maniac. They might well be, but they might have also been dealt a bunch of strong hands.

2. Passivity isn’t conclusively defined by VPIP and PFR. You also need to know, for example, the player’s bet/raise frequency both after the flop and on each street – as well as the number of times that they bet or raise post-flop.

1. Match Poker is trialling reducing the number of weak opening hands that you and your opponents are dealt. This is because players are less likely to play for many hours on a phone – and so will have a better experience if they are not folding hand after hand. As, typically, good poker players voluntarily put money into the pot around 21% of the time (i.e. they fold nearly 4 hands out of 5). We have tweaked Match Poker’s dealing algorithm so that, in the long run (and randomly), it deals the weakest 20% of hands (i.e. 34 out of 169) at an 80% reduced frequency. To allow for this in your VPIP calculations, increase them by 10% – (i.e. multiply them by 1.1). For example if you desire a VPIP of 21, make this 23 during this trial period.