In every ‘Hand Summary’, we show you, in real time, how you played and scored among the thousands of players who have played exactly the same hand (from your position) in the past, and in your match.

We use a HEATMAP to do this.

The heat map shows you the results, in that hand, for all players past (i.e., when it has been dealt in previous matches) and present (i.e., those who you are currently competing against who have already played that hand.

The concentration of those who won chips is shown in green and those who lost chips in red. The yellow-colored sections show chips won or lost by the rest of the players (i.e., there are players who won/lost chips in those places but in very low proportions).

In the above example, we can see that:

So it is clear that most players are winning chips in this position. However, quite a number of players lost chips – most around the -150 chips. If you lost about 150 chips you only beat around 20% of other players.

Some other conclusions you could draw are that:

This kind of insight into poker play is made possible only with Match Poker Online’s unprecedented and revolutionary big data approach to benchmarking poker performance. Learn more about our Rating Algorithm here! 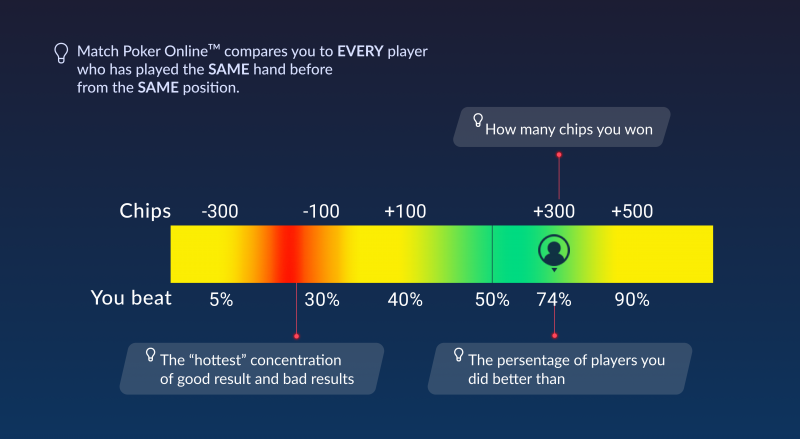