The Match Poker Online™ WORLD CUP is where eligible players, from all levels (not just the very best), get a chance to represent their country and play to see who is the best match poker player in the world!

These are not team trials – rather, we are identifying the leading individual players in the world who will represent their countries.

There are multiple ways to be eligible to compete in the World Cup Playoffs. All are achieved through your efforts in playing the Match Poker Online™ app.

As of Wednesday October 5, there are 385 players who have already achieved eligibility, but you can still qualify, in any of the ways set out above, until November 27.

Note: Management reserves the right to grant wild card entries to the playoffs based on exceptional performance during a season.

How do I know if I’m eligible for the World Cup Playoffs?

Regardless, all players who are eligible for the World Cup Playoffs will be contacted by email, inviting them to play in the World Cup Playoffs. If you have not given us your email details, please do so in the app by going to Settings (you will then need to scroll to the bottom of settings) and entering it in the field next to ‘Email’. This is so we can notify you. Failure to give us your email will mean you will not be invited to the playoffs.

After you have been notified that you have qualified, you must accept your invitation by registering for the event.

The Ruby World Champion will also be crowned the overall World Cup winner!

Each of these competitions will be conducted the same way, with the Playoffs and Finals being exclusive to players from the same Rating Tier.

In both the Playoffs and the Finals, players will be requested to play 2x TRIPLE BATTLES throughout the weekend.

A Triple Battle is simply 3 Battle Royale Matches, held back-to-back. Players must do this twice in the Playoffs. Winners will have to do it twice again in the Finals.

[Don’t know what a Battle Royale is? Read about it by clicking here.]

In a Triple Battle, each Battle Royale starts every hour for three consecutive hours. For example, if the first Battle Royale is held at 1pm, then the second will start at 2pm and the third at 3pm.

Because each Battle Royale lasts for about 45 minutes, we expect a Triple Royale to last for 2 hours and 45 minutes. Please set aside 3 hours – and you will have to play TWO of these over the weekend.

At the end of each Battle Royale, players will receive scores in exactly the same way as during our Premiership Seasons: 5 points for having the highest score in your Match Ladder, 4 points for second-most, all the way to 0 points for coming 6th.

Because a Triple Battle consists of three back-to-back Battle Royale matches, each player will receive a score between 0 and 15 for each Triple Battle.

Because players must play two TRIPLE BATTLES throughout the weekend, by the end of the Playoff weekend, all players will have a score from 0 to 30.

We will show all players’ scores on a ladder.

The top 36 players will then be invited to play in the Finals.

The Finals will be held the following weekend in exactly the same manner as the Playoffs.

After all 36 players have played two Triple Battles, the single player with the highest score will be declared the winner – and the World Match Poker Champion in their Rating Tier.

Any ties will be broken by counting the net chips won/lost by each player.

The Ruby World Champion will also be crowned the overall World Cup winner!

In each of the four IFMP Rating Tiers, we will hold Playoffs to narrow down the field of players before the FINALS.

All eligible players will be required to play 2x TRIPLE BATTLES during the first weekend in December.

Players will have four time slots where they must play these matches:

*If your city is not on the same time zone as one of the listed cities, then please go to the links on the right. This will allow you to add your own city to see what the time is where you live.

Each row is one Triple Battle. You must play in two of these. Please choose two that suit you.

If you are eligible for multiple different reasons – perhaps you won a weekly challenge AND placed in the top 15% in a Premiership Season – then you will be allowed to play in THREE Triple Battles in the Playoffs, instead of two. We will then take the results of your best two Triple Battles.

Just like the Playoffs, a Final will be conducted in each Rating Tier.

The finals will be held the weekend after the Playoffs.

ALL finalists will be required to play two TRIPLE BATTLES, and must play these at BOTH of the following times:

The winner of each tier will be crowned World Champion of that Rating Tier, with the winner of Ruby Tier being crowned the Match Poker Online WORLD CHAMPION for 2022.

All of these players will display their country flag on their player icon, and so will be competing for the glory of their nation!

The prizes below are in USD, for the winners of the Finals in each category:

Yes, the winners will win ACTUAL MONEY, without it costing them anything to qualify! 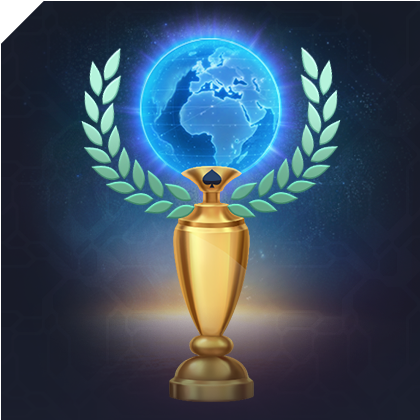 Tap on each question to view the answer

Does this competition cost anything to enter?

No. Nothing at all.

The Match Poker Online app is also free to download and play, so at no point do players need to pay money or even give us any of their credit cards or financial details.

Help! My country that shows in the app is not the country I want to represent in the World Cup.

That’s ok, just email us at contact@matchpoker.com and tell us what to change your country to (one change per player).

What about Guest Mode? How does this affect eligibility?

All players must have a registered account in the app to be eligible. They cannot be playing on Guest Mode. However, if you achieved one of the above eligibility checks while playing on Guest Mode, you will still be allowed to compete as long as you register an account on the same device before November 27th.

Those times don't suit me!

We’re very sorry. We’ve tried to pick times that suit as many players as possible. We know these times aren’t convenient for everyone. Fortunately, for the Playoffs at least, you only have to play in two of the four available times, so can choose the most convenient.

What about Premiership Season 09?

You can still gain entry to the World Cup Playoffs by being in the top 15% of eligible players in Premiership Season 09.

In order for this to work, Premiership Season 09 will finish a day earlier than normal – on the eligibility cut-off date of November 27tat 23:59:59 GMT.